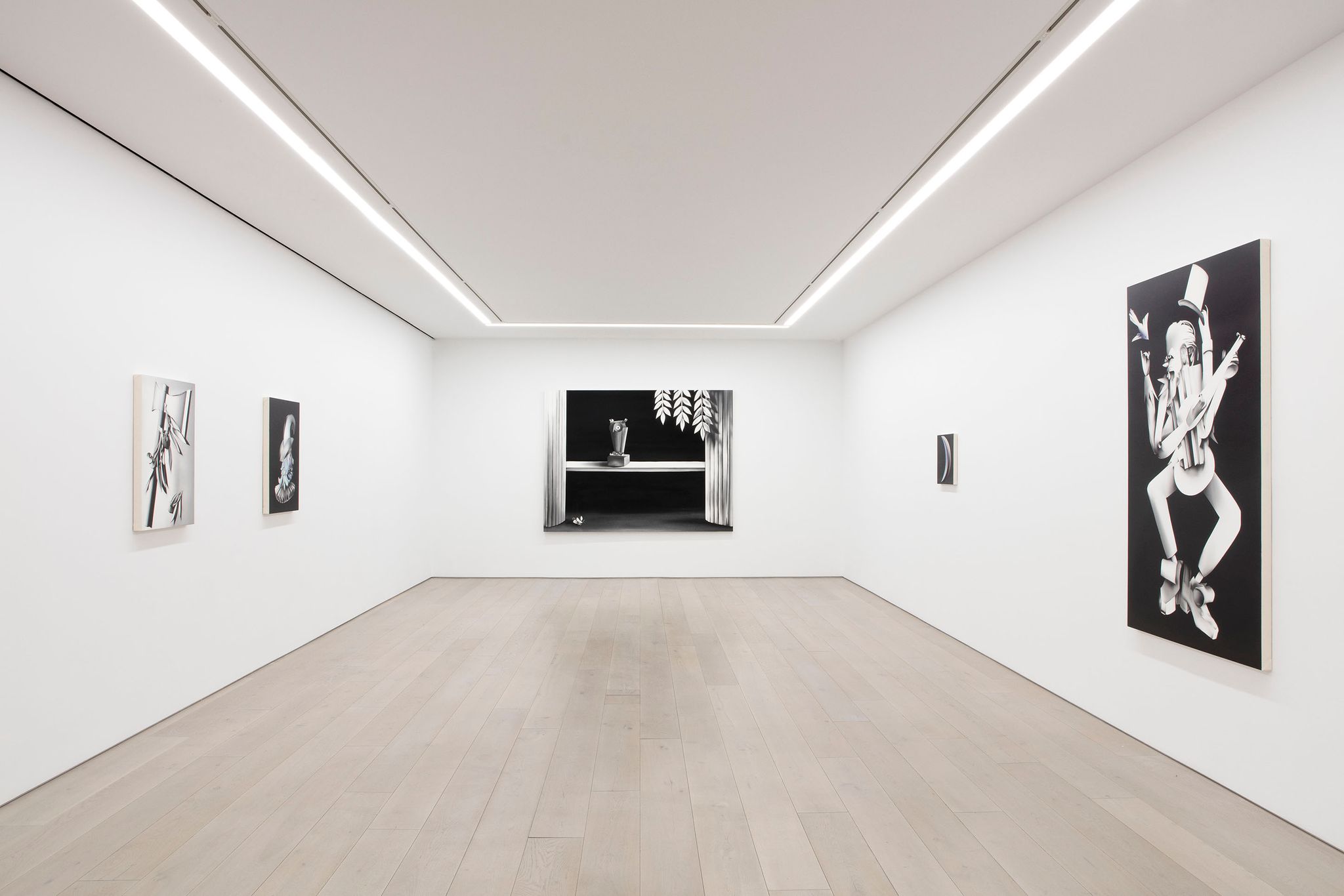 Perrotin is pleased to present This Is Hardcore, an exhibition of new paintings by Los Angeles-based painter Kara Joslyn, marking the artist's first solo presentation in New York. 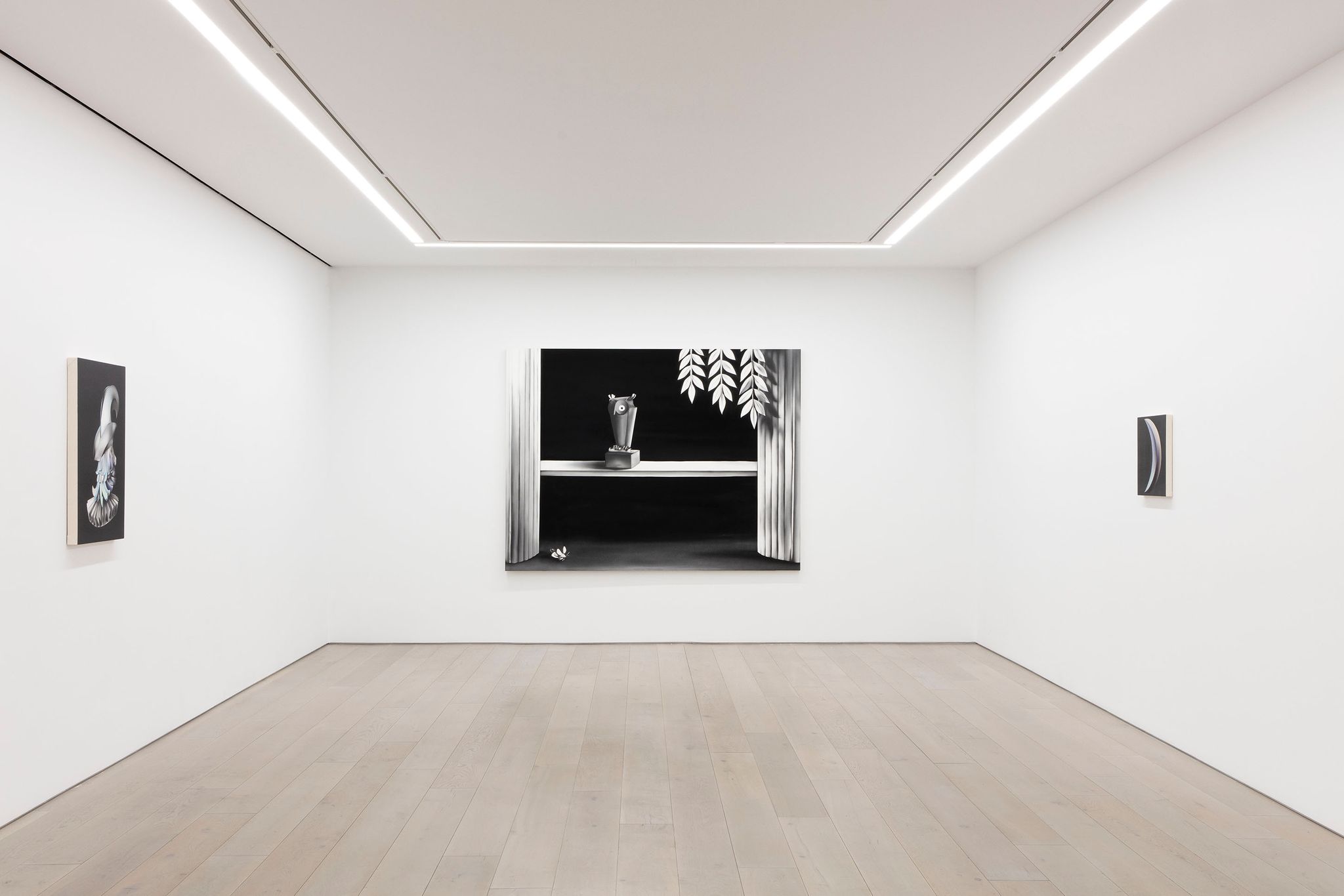 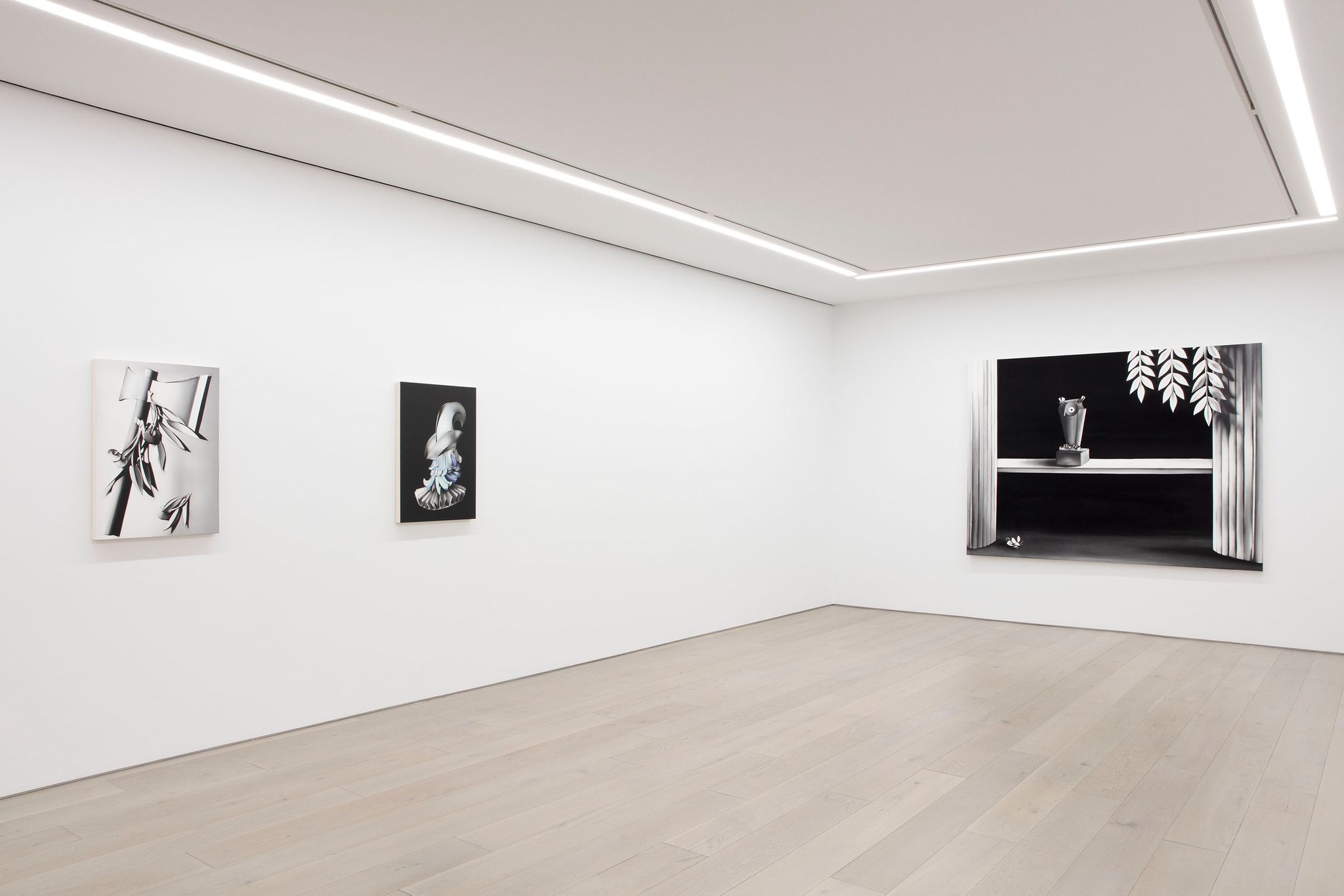 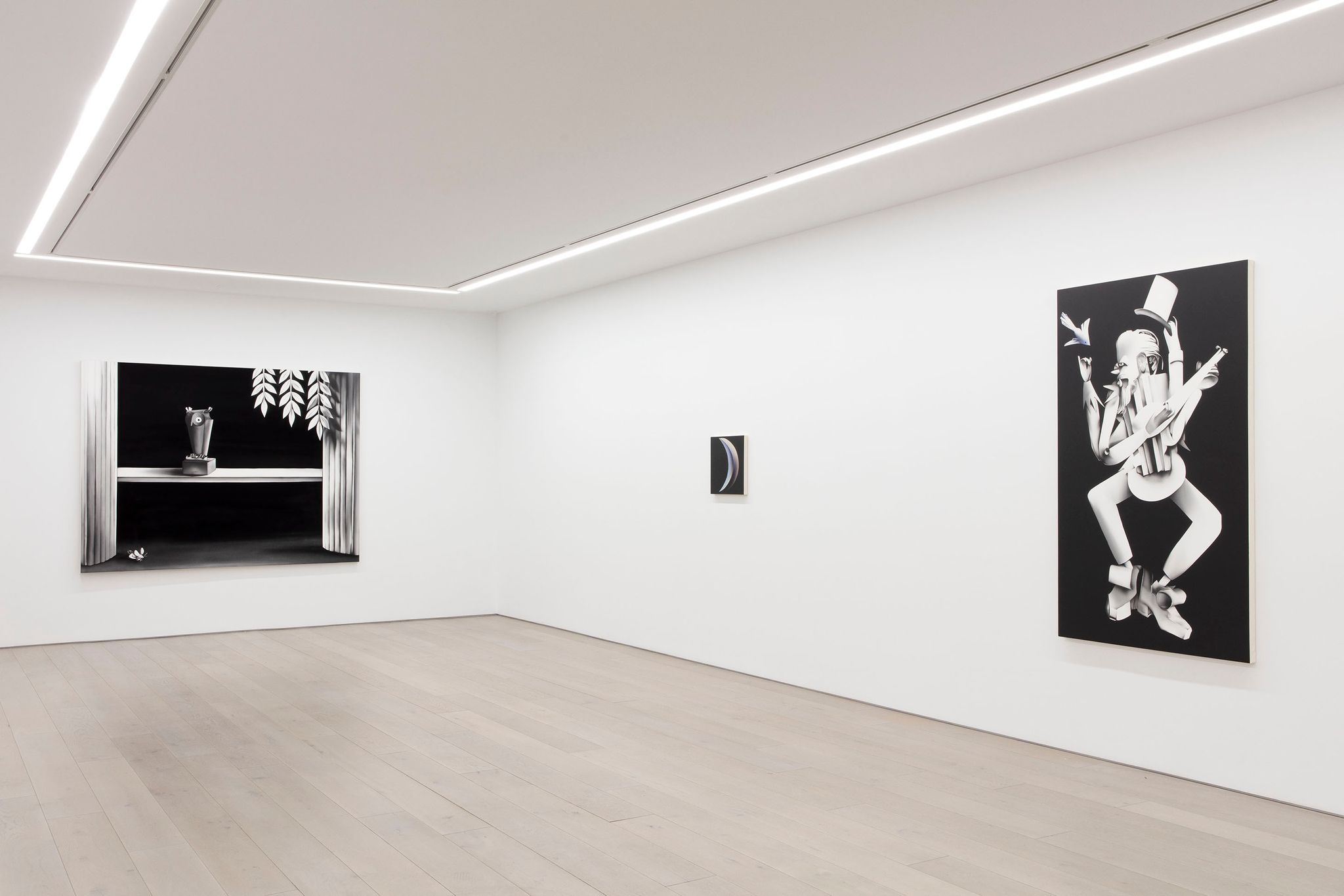 Kara Joslyn’s paintings negotiate gaps between the material world and dream-like impressions, mapping the slippages between earnest storytelling and elusive trickery that constitute our sense of self. Uncanny, humanoid figures imbue voids of black space with a rich, allegorical weight, projecting a sense of symbolic fantasy onto the illusion of real-life objects and scenes. Joslyn’s characters possess the theatrical mutability of a one-person play: the jester, bard, prophet, and traitor are unified in sparse, unfussy gestures. Trickery redeems the tension staged between symbolism and reality, slipping past the trap of binary thinking, propelling the story forward. In this sense, Jolsyn’s paintings echo a certain narrative sensibility captured by the writer Dodie Bellamy: “in the contest of ‘imagination versus reality,’ I am drawn to ‘versus.’” 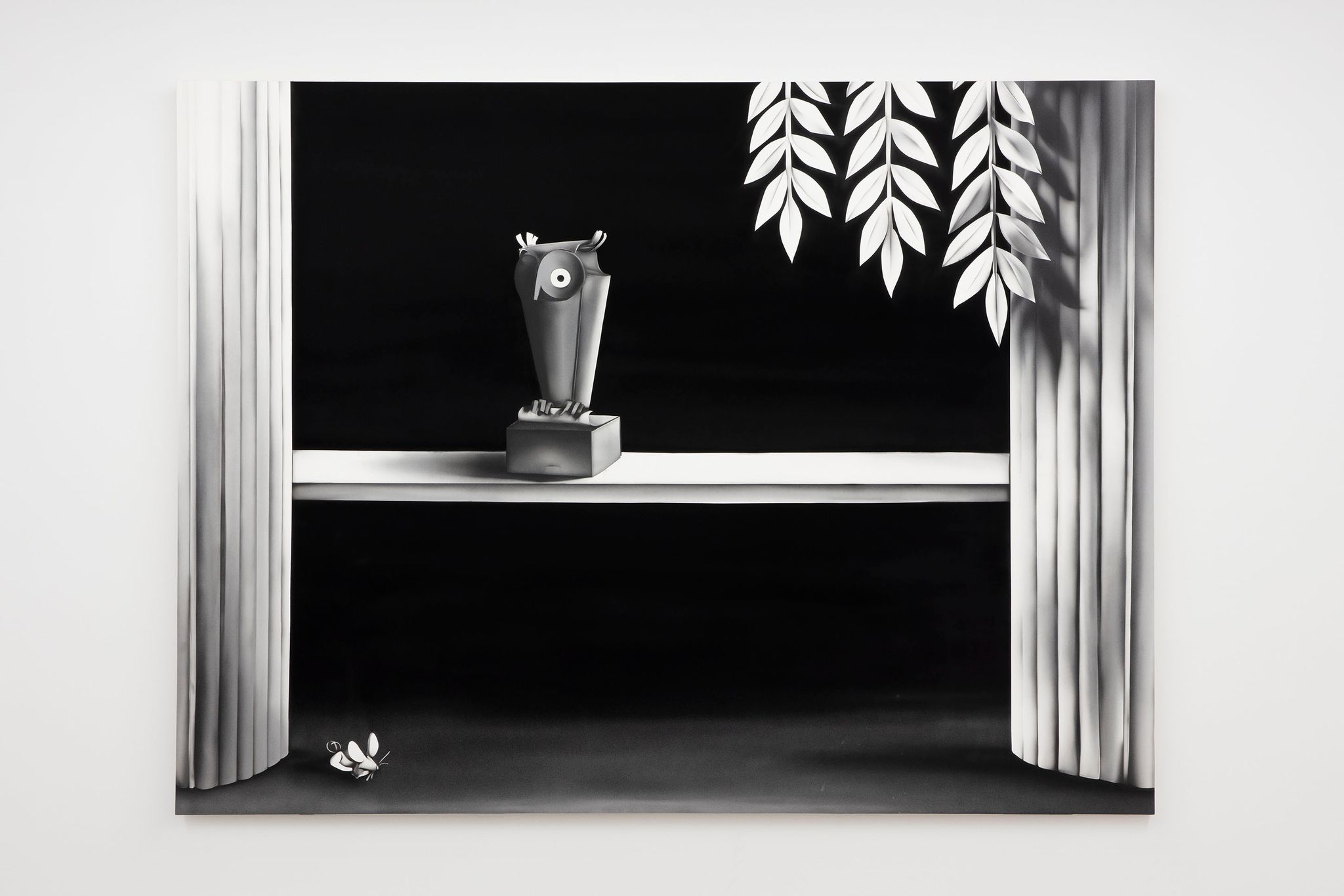 Each canvas is an appropriation of sorts, animated by re-modeled and re-made source images. Joslyn does not paint from a place of subjective interiority, but rather projects psychodrama onto mythic symbols and tropes, readapting them to the cultural consciousness of our moment. At heart, Joslyn’s paintings hack traditional mythology, reworking old standards into surreal, future-oriented webs of subconscious feeling.

“If photography is the false index — the truth that tells a lie, I like to think of painting as the trick — the lie that tells the truth." In This Is Hardcore, Joslyn gives the figure of the muse a facelift. The muses appear to have been somewhat relegated to the dustbin of art history, but they also personify the spirit that possesses us to lose ourselves to dance, sing, rave or run into a mosh pit. Oft depicted in Renaissance painting as a group of women with harps and lyres, the muses are also powerful dieties. Performing “the cosmic dance of creation and destruction,” the Shiva Nataraja, whose monumental statue lives in the entryway of the CERN particle collider, unifies pagan mythology, art and modern physics. In this new series of works, Joslyn imbues the muse with the kinetic energy of American underground subcultures, blending the sheen of rave culture and the impulse of hardcore punk into a system of timeless, or out of time, iconography. Each painting exudes a type of sonic ambiance, casting out dark, pop-tinged energy. Joslyn sources her imagery from mid-century paper craft books. Taken out of the context of their time, these paper figurines seem absurd – removed from their social function as window dressings, advertisements, and craft projects for nuclear family home decor. They appear to become strange relics echoing our reality. Joslyn’s paintings mimic the form of these paper figurines: both begin as white rectangles, and are then manipulated by human hands, given conditional lighting, shape, and recognizable features. How is it, she seems to ask, that certain figures manage to take on an allegorical intensity that is at once in and above their time? Working with car paint pigments and airbrushes, Joslyn approaches paint as a type of metallic material, not an arrangement of color. Her unconventional process lends each canvas a holographic feeling, suspending each figure in a middle ground which is not quite of this world, yet not purely an extension of individual imagination. Illusion is collapsed onto illusion, creating a dense field of sincerity and visual deception.

With This Is Hardcore, Joslyn neither affirms nor denies reality and the myths we construct to make sense of it. Rather, she simply renders slices of cultural unconscious without judgment, as if to say, “it is what it is.” Working in the vein of American absurdism, subcultural drama, and dream- state archetypes, Joslyn takes a trickster’s swipe at popular mythology, lending it a sense of redemptive forward motion. 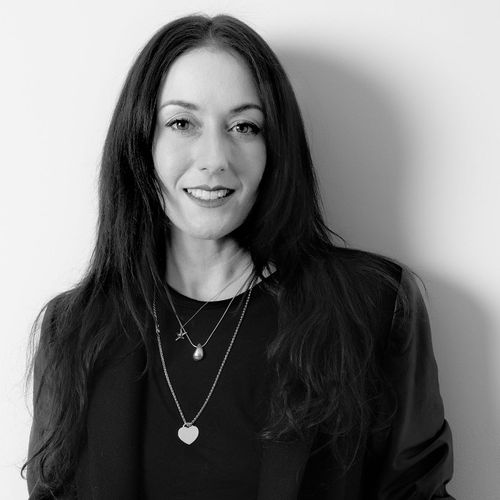 Born in 1983
Lives and works in Los Angeles, USA

Kara Joslyn explores themes of storytelling and illusion through her multi-dimensional paintings. The artist’s moonlit spaces merge fantasy and reality, creating allegories of her own that are at once unsettling and inviting. Using 1950s instructional craft books and mythology as source material, she relocates domestic and decorative figures into timeless, and uncanny scenes. As appropriator, forager, and translator, Joslyn engages the viewer’s eye as trickster. Interested in illusion, she uses a mixture of powdered optical automotive paint pigments that appear holographic. Her airbrush technique — historically used in graphic design before the invention of computers — heightens the atmosphere by creating a digital-like image, combined with Caravaggio inspired lighting. Altogether, the artist's tableaux allow us to travel back and forth in time, intertwining historical symbolism with futuristic dimensionality, as well as our own unconscious. As Joslyn says, “If photography is the false index — the truth that tells a lie, I like to think of painting as the trick — the lie that tells the truth."

More about the artist
List of artworks
Floor 2
Floor 2